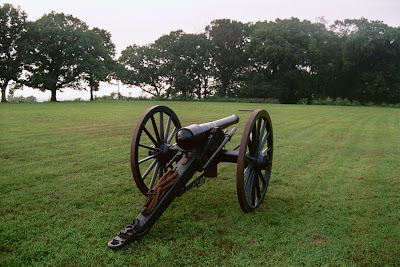 Parrott guns had rifled barrels which cause the shells to spin. This spinning allowed better aim. Morgan took two along on the Great Raid.

John Hunt Morgan was now in command of approximately 2,460 men, two three-inch Parrott guns and two twelve-inch howitzers.[ii] He divided his men into two brigades placing his brother-in-law Colonel Basil Duke in command of the larger first brigade of 1,460 men and Colonel Adam Rankin “Stovepipe” Johnson in command of 1,000 men in the Second Brigade. James Edward Evans, my second great grandfather, was a member of the Second Brigade.

As the Confederacy tried to counter yet another disastor, General Bragg was ordered to send members of the Army of Tennessee to Vicksburg, Missippi. With his forces depleated, Bragg agreed to allow Morgan to make a diversionary raid into Kentucky.

Simultaneously, in a moment of ironic foreshadowing, the prisoner of war exchanges under the Dix-Hill Cartel halted. Reasons citied for this collapse include the refusal of the Confederate leadership to exchange or parole Black prisoners and problems with prisoners returning to the battlefield before paroles were completed. Horrific consquences were wreeked upon unfortunate soldiers, both Northern and Southern, who were left to suffer and die in dismal prisoner of war camps.

Both Northen and Southern soldiers were coming to the realization that this war would not reach a speedy resolution and thus it would exact a horrific toll.

My thoughts ask me where are the many little orphans calling and crying for pappy, while his body is moldering in this vast grave-yard. O who will answer for the sin of this most dreadful and calamitous war."

“About June 11th we left and marched and crossed the river not far from the village of Rome. The command camped. Our regiment, the 9th Tenn (Wards) 3 companies, my company and two other were sent to capture the mail and guard. We captured some of them and all the wagons. This was on the pike between Carthage and Hartsville, 8 miles from Carthage. Morgan expected to attack the Blue coats at Carthage next morning, but that evening a courier from General Bragg ordered Morgan not to attack Carthage but to return to Monticello, Ky. and stop the supposed advance of General Saunder into East Tennessee, but he had passed to the east of us.”

A few days later, Bragg withdrew from Tullahoma and completed a retreat to Chattanooga by July 4th.

“Lee was marching toward Pennsylvania and Bragg, in danger of being overwhelmed by Rosecrans, directed Morgan to create a diversion by marching into Kentucky and threatening Louisville. Being essentially a free lance, accustomed to independent action, Morgan determined to cross the Ohio River, General Bragg's order to the contrary notwithstanding. Hitherto the career of the cavalry chieftain had been brilliantly successful but the contemplated long ride from the sunny hills of Tennessee through Kentucky, Indiana and Ohio was to end in grave and almost irreparable disaster. In high feather and in full song Morgan's gallant young cavalrymen formed in column, looking toward Kentucky. There were two brigades, the one commanded by Colonel Basil W. Duke, the other by Colonel Adam R. Johnson. Following the cavalry were four pieces of artillery--a section of three-inch Parrott guns and two twelve-pound Howitzers. When General Morgan, tastefully dressed and superbly mounted, rode along the column, going to the front, the men cheered and sang their song:

To this ovation General Morgan, hat in hand, smilingly bowed his acknowledgement and appreciation. When Colonel Duke, with flashing eye and flowing plume, appeared there were more cheers and another song, "My Old Kentucky Home.’ When 'the bugles again sounded’ the cavaliers, two thousand four hundred and sixty effective men ‘With all their banners bravely spread, And all their armor flashing high,’ moved from Alexandria, Tenn., June 11, 1863, toward the Cumberland River. ” [v]

Morgan had shown foresight sending his brother-in-law Basil Duke to lead a scouting party along the Ohio River. This action reveals Morgan’s intent to cross the river despite orders demanding that he remain in Kentucky.

“Morgan ordered me three weeks previously to send intelligent men to examine fords on the upper Ohio . . to make an effort to recross it, except at some of these fords, unless he found it more expedient, when he reached that region, to join General Lee, if the latter should still be in that region."

Further betraying his intent to have his own way, were baited inquiries from Morgan to Wheeler implying the intent to capture Louisville which had long been under Union occupation and control.

Your dispatch is just received. Can accomplish everything with 2,000 men and four guns. To make the attempt with less, might prove disastrous, as large details will be required at Louisville to destroy the transportation, shipping, and Government property. Can I go? The result is certain.”

John Hunt Morgan set out, not to attack Louisville, but to enact his plan of bringing the war to the North by purposefully crossing the Ohio River to raid the states of Indiana and Ohio.