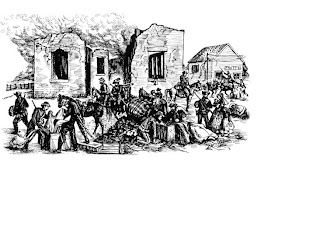 Sketch of the Courthouse Square in Lexington, Indiana[i]

“After riding an hour or so we halted in the suburbs of the town of Lexington, Ind. The report was that the Yanks were in town and we were to fight them. I let my lead horse go and road forward to find my company. I fell in and we moved through town without any disturbance and camped a mile beyond in a lane and lot. We had to go a half mile after corn. It was very dark. Most of the boys did not feed at all. I and another fellow went and got some corn. It was as much as I could do to find my way there and back.”

Burke, a true cavalryman, often showed remarkable concern for his horses, feeding them before entertaining thoughts of finding food for himself. Burke realized, that without a fit horse, he was doomed.

“Bivouac on a Mountain Side”
Walt Whitman

I see before me now, a traveling army halting;
Below, a fertile valley spread, with barns, and orchards of summer;
Behind, the terraced sides of a mountain, abrupt in places, rising high;
Broken, with rocks, with clinging cedars, with tall shapes, dingily seen;
The numerous camp-fires scatter’d near and far, some away up on the mountain;
The shadowy forms of men and horses, looming, large-sized flickering;
And over all, the sky – the sky! far, far out of reach, studded, breaking out the eternal stars.

After spending the night in Lexington, the Raiders traveled northeast.

“Saturday, July 11
Rebels reported to have traveled all night. We follow. Pass through Salem, Canton, New Philadelphia, Vienna & Lexington. Camped near the latter.”

Rest and sleep period were quite short. Often time that could have been spent in rest was spent in collecting booty.

“Saturday, July 11th, 1863. Weather pleasant. We got up early and saddled up. The report was that the Yanks had passed near us that morning. We went back to Lexington, Ind. and hitched our horses to the fence around the courthouse, then fed from the hotel stable crib. I learned that the Yankee cavalry had actually entered town very early that morning not knowing our men had possession of the place, but as soon as they found it out, they left in a hurry, before the Gen. who saw them had time to have them attacked. Lexington is a small place. The courthouse is a plain square building enclosed in a circular white fence. Sergeant Miller and toggle bursted open the door of a confectionery store. The company pitched in and soon cleaned it out. I got a box of peanuts, some cakes, candy, cove oysters, cheese, etc. We all got as much as we could eat and store about us. It was late when we mounted and took the Vernon road singing Morgan’s Northern Raid Song.

Boom! Boom! Hear ye the crash
As our Roving Exile Bands
Chase with a wild “Hurrah and dash”
The Yankees through the land.

The “Vaulting Saddle” is out home
Our chamber the welkin wide
And where’ ere danger darkest roam
There we are bound to ride.

Fore “Liberty or Death” we fight,
And woe to those who dare
To wake our carbines flashing light
Or wait their deadly glare.

Our homes beneath the Tyrants hoof
Groanth in direst pain, But let his minions stand aloof,
When we shall come again.

Our chieftain, brave as “Desert King”
Roameth where’ ere he will,
And we but wait his clarions ring,
To bound o’er vale and hill.

Our guerdon is the “fair ones” smiles
That shine along our way,
And we, for them, despise the toils-
That face us night and day.

To horse! To horse! The bulge calls
Inviteth to the field
When we must meet both “Shell and Ball”
Or to the tyrant yield.

“Hark!” hear ye the ringing shout
Of those who will be free,
Our glory is the Yankees’ route,
Our watchword “Victory.”

Following the Lexington-Salem State Road (now known as the Cincinnati Trace) the Raiders rode toward Lexington. Morgan was employing his best tactics, as were even the youngest citizens of Indiana who were bent upon protecting their prize possessions.

“One little Lexington girl, afraid the invaders would steal her pony, hid the animal behind a piano in her home.” [v]
"As the morning progressed, the Postmaster was held up, the office looted of all cash and postage stamps. According to Josephine Shea, Morgan and a few of his men took the mail bags down to her grandfather Patrick Shea's home and emptied the contents on the living room floor, opening all letters. Many of the letters contained money from soldiers to their families which was also stolen. After opening the mail Morgan demanded that the Shea family cook dinner for him. The three general stores in town were broken into and the men fitted themselves in new clothes and boots and took corn and sides of bacon. At about eleven o'clock the raiders left town. Two miles east of Lexington a farmer hailed them shouting 'Hooray for Jeff Davis.' Morgan's response was 'good, now bring your best horses and help the cause' and they forced him to lead the way to Dupont. He walked home later a much wiser man.”
~ Alice Jones , Scott County Journal, September, 1924
Hot weather and dusty roads made the long hours in the saddle difficult to endure.

“We halted in a little town called Paris for fifteen minutes. It was very hot and dusty. A man from each section gathered all the canteens in the section and fell out and filled them with water. I fell out several times for that purpose. Once the regiment got a mile or two ahead and I had to do some hard riding to catch up.

Whenever the men were allowed to stop, cool milk and spring water were sought after luxuries.

“The most exciting event was when a bunch of rebels come into the yard, clamoring for something to eat. One insistent fellow attempted to go into the kitchen in spite of a refusal of my stepmother to admit him. She flourished a butcher knife in his face saying, ‘I’ll let you know I am one of the blue hen chickens from the state of Virginia and if you make any further attempts to enter here, I’ll cut your heart out!’ Eyeing her intently for an instant, the rebel said, ‘I know them Virginians will fight like the devil and I have no doubt you mean what you say.’ He went away and left her, for the time being, mistress of the situation.”