Burnside, anxious for Morgan’s capture, continued to tighten the net troops he’d cast about the Raiders.

Commanding Officer, Aberdeen:
I have one brigade 3 miles in advance of this place. His [Morgan’s]route is either in direction of Chillicothe or Gallipolis. He is not more than 15 miles in advance of me. I am traveling 40 miles per day; men in good spirits; horses worn down; country very rough and rugged, but I will continue the pursuit as long as possible. Have sent forward today for purpose of blockading the roads with timber.

General Hobson, Piketon:
Push on rapidly with your command. Runkle reports that he is fighting at Berlin, east of Jackson, and Judah is between Morgan and Gallipolis. Manson is on the river in boats, to prevent crossing. Gunboats are at Gallipolis and above. Push on and catch Morgan, if possible. Answer before leaving Piketon.

Col. Lewis Richmond:
Captured one of Morgan’s men. He says Morgan is pushing for the mountains, and expects to cross the Ohio at the mouth of Big Sandy [KY and W.VA. border] or at some point in vicinity. Hobson attacked rear guard at Williamsburg yesterday. I have heard nothing of Judah. He will be too late to do any good. Will leave for Manchester and up the river. There is no doubt but the most of Morgan’s force stayed last night near Locust Grove. He is moving by two columns.

General Manson:
Do you mean that his main force was moving toward Locust Grove? If so, he means to try to cross the Scioto at Piketon.
A. E. Burnside,
Major-General.”[ii]


“Thursday, July 16
Follow rebs in direction of Winchester where we stop & feed, go on, pass through several small towns, stop and feed near one called Locust Grove. Morgan as far ahead as ever I guess.”

Hoping to slow the pursuit General Hobson and his men, Morgan’s column burned each bridge they crossed as they raced toward Buffington Island. Likewise, hoping to slow the Raiders progress, the Ohio militia fell trees, built barriers across the roads, and burnt bridges.

“July 16. Today we find the first destruction in our way, consisting of felled trees. The enemy are now pressing us on all sides, and the woods swarm with militia. We captured hundreds of prisoners, but, a parole being null, we can only sweep them as chaff out of our way. Today we crossed the Scioto to Piketon, and as usual, destroyed the bridge. Thence we moved to Jackson.

The Raider’s progress was hampered by bushwhackers and skirmishes as they hurried between the towns of Piketon, Jackson, Hamden, Vinton, and Pomeroy.

“Thursday, July 16th, 1863. Weather pleasant. Awhile after day we halted in a stable yard and fed. While feeding the command passed us. The Colonel did not order us to move till he got his breakfast. We then rode lively being in the rear of the command. About twelve o’clock we came to a little town on the Sciota river and the Cincinnati and Dayton canal. On entering the place I found that our men had fired a canal boat that was in the employ of the U. S. government, and a mill caught fire from this, and the flying sparks fired a stable or two. The command, I was told, tired to put out the fire on the mill, but it was a windy day and their efforts were unsuccessful. We halted half an hour in town the command had left. The boys got whiskey by the bucket full. I got a large bottle to take along but changed my mind and poured it out, fearing that it might be the cause of somebody getting too drunk to ride, and being left behind. We knew very well that all that strayed too far or left behind was either killed or captured by the bushwhackers. We left town and as we were fording the Sciota river the bushwhackers commenced firing at us from the hills. We had a bad place to ford. As fast as we got across we formed in line to defend or protect some buggys and spring wagons containing our sick and wounded while fording. These vehicles were all captured or pressed on the raid, most of them since crossing the Ohio river. All got across safe, and as we moved on the firing became more rapid.”

“A March in ranks hard-prest, and the road unknown;
A route through a heavy wood, with muffled steps in the darkness;
Our army foil’d with loss severe, and the sullen remnant retreating;
Till after midnight glimmer upon us, the lights of a dim-lighted building;
We come to an open space in the woods, and halt by the dim-lighted building”

“The regiment rode lively till near dusk, when we caught up with the command and commenced crowding past to get to the front. The command halted in another little town. It was near dark enough for candle light when we all got past. We then halted in a lot on the left near a large white house. We formed in lines, each company by itself, one behind another and dismounted to rest. I went to the crib and got a heavy feed for my horse and had some trouble in finding my horse again. I then went to the house and took a good wash to get the dust out of my eyes. Supper was ready so I then took supper with some fifteen or twenty others at the house. I was hoping that we would all get a good nights sleep when I heard the most unwelcome order of, ‘Mount your horses,’ but I was willing to go ahead when the officers thought it necessary. The command had nearly all passed so we had to double quick to get in advance again. We had been in the rear all day. After riding three of four miles at a lively gate we camped on the right of the road in a lot next to a stable. The house where the Colonel put up was opposite. We unsaddled and made our beds down. Ben Young and others got into a dairy and got a lot of put up cherries. I slept well. The dew fell heavy during the night.

Burnside was certain that Morgan would attempt to cross the Ohio River at his first opportunity.

Colonel Runkle, Chillicothe, Ohio:
What amount of force have you, and have you any artillery? Morgan’s advance was at Locust Grove last night. I think he will try to go out by way of Portsmouth, but he may make up toward your place. Keep a good watch.

Captain Fitch (or commander of any gunboat near Maysville):
I am fearful that Morgan may turn on our men, and try to cross at or below Maysville. You will, of course, look to them.

The anguish citizens of Ohio clamored for news of Morgan. Even small town newspapers avidly covered stories of the Raid.

"On July 16, 1863 at 8:15 a.m. they entered Poplar Grove riding down Chenoweth Fork Road, crossing the bridge over Chenoweth Fork Creek. The Raiders were lined for several miles, as they brought wagons and buggies carrying their sick and wounded and their canons. They ordered Mrs. Kendall to start baking bread. They were so hungry that the bread was snatched out of the hot oven and they began eating the half-baked bread. A few of the raiders stopped at the Lewis Beekman property and when they left, Mr. Beekman was without a horse and 20 pounds of honey. They burned the 12 foot long wooden bridge across Sunfish Creek and what the Raiders didn't eat, they destroyed." 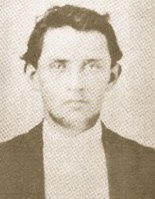 Joseph McDougal, a schoolmaster, was killed over ten cents and a smart comment

"Money was taken from the prisoner and Joseph only had ten cents. He stated that was ten cents more than he wanted them to have. He was asked to step out of line and was taken to another area and questioned. Next two men placed Joseph into a boat and the two men were asked to aim and fire. He was hit below the right eye and the other shot hit his chest".

“MORGAN’S GREAT RAID IN INDIANA & OHIO RAILROADS TORN UP AND STEAMSHIPS SEIZED AND DESTROYED On Wednesday last, Morgan crossed the Ohio River at Brandenburg. He first seized the steamer John B McComb and with her seized and boarded the Alice Dean, one of the finest boats on the river. By the aid of the steamers, Morgan crossed with his whole force, consisting of about 4000 cavalrymen, with battery of guns. After crossing, he burned the Alice Dean. They first destroyed a bridge on the Indianapolis and Jeffersonville Railroad, where they were met by small forces. The track was torn up on both roads for a considerable distance and the bridge at Seymour on the Ohio and Mississippi road destroyed. Our mails from Cincinnati having been cut off since Monday evening, we are without reliable intelligence as to the exact tenor of events in that region. We learn, however, by telegraph that Morgan’s forces have passed around Cincinnati, destroying Camp Dennison, and tearing up the track and otherwise injuring the Little Miami and the Marietta and Cincinnati roads, from fifteen to thirty miles out of Cincinnati. The latest reports assert them to be coming up this way, probably striking for the river about Maysville, so as to re-cross into Kentucky. His forces, entirely of cavalry, Morgan can elude pursuit, at least for a short time. The country having been completely stripped of soldiers, the Militia has been called out to arrest his progress. Until an overwhelming force is obtained, he may around at will but any attempt to re-cross the river must be extremely hazardous and almost impracticable.”

As the Raiders progressed, Burnside wisely turned his attentions to the possibility that Morgan might try to cross the Ohio River at Buffington Island.

Colonel Runkle, Hamden:
I have ordered a fore from Marietta, under Colonel Putnam, to Buffington Island. Enemy threaten to cross there. Have force on cars, so as to be at Athens of Marietta, as occasion may require, in case the enemy are turned back from the river. The following is the dispatch I sent Colonel Putnam. I trust the movement to your good judgment, to impede Morgan as much as possible.

Colonel Putnam, Marietta:
If you cannot be at Buffington before noon tomorrow, I fear you will be too late. You can embark them on the boat, and move down rapidly but carefully, and if you find the enemy has been turned back form the ford, you must hasten up river to Parkersburg or Marietta. Under no circumstances must you allow your boat to fall into the hands of the enemy. Have all the means of crossing the river destroyed that you find on the banks. I leave your movements to your good judgment. The object is to prevent the crossing at Buffington, and then, if the enemy is turned up toward Marietta, to move up quickly and assist that place. A gunboat will be at Buffington in four or five hours. Colonel Runkle will send troops to Marietta. Lose no time.

Captain Fitch, Commanding Fleet, Pomeroy:
I trust to you to check the enemy at Pomeroy and Buffington Island until our men get up. There is a force of our men and two pieces of artillery at Buffington. Captain Sebastian’s boat is, of course, subject to your order. I am sure you will not allow them to cross if you can prevent it. Captain Sebastian should start at once.