“Who but the Soldier knows the true definition of ‘War'?”

Captured in Cheshire, Gallia County, Ohio on July 20, 1863, near the end of Morgan’s Great Raid into Kentucky, Indiana, and Ohio, James Edward Evans was first sent to Cincinnati, Ohio then moved by steamboat to Camp Chase, near Columbus, Ohio on July 26, 1863.[ii] Camp Chase was originally a prison for civilian political prisoners but began processing military prisoners in preparation for exchange in 1862 under the policy of the Dix-Hill Cartel. After the collapses of the Dix-Hill Cartel on July 13, 1863, the population of Camp Chase rose dramatically. The prisoners were “accommodated” in wood frame buildings and huts. [iii] However, it quickly became apparent that other lodgings had to be found. Union leadership scrambled to find camps having room for prisoners.

Families of the Raiders appealed to government officials seeking the release of their captured loved ones. Unfortunately, while Kentucky had initially adopted a policy of neutrality in the war, the General Assembly now supported the Union. Thomas Bramlette was elected to replace Kentucky Governor James F. Robinson, who had served out Beriah Magoffin's unexpired term. Bramlette had resigned from the Union army in 1862 to accept President Lincoln's appointment as United States district attorney for Kentucky. Bramlette was not inclined to do anything that might assist in gaining the release of any of Morgan’s men.

Prisoners sent dozens of letters home reassuring their families and explaining the events of their capture. Imprisoned Captain Thomas M. Combs, in writing home to his wife Lou, answered my childhood questions of what became of the stolen horses:

“One man would frequently ride five horses down in one day. Mount a fine fresh horse in the morning, start off at a dead run, and before ten o’clock he would hardly be able to put one foot before another, then ride him up to a fine stable, change saddle and bridle, turn the tired horse loose in the lot and go ahead again.”[iv]

Camp Douglas, in Chicago Illinois, was selected as a fit prison for enlisted men. On August 17, 1863 the first group of Morgan’s Raiders arrived at the prison gates. A good number of Chicago citizens and the press turned out to capture a glimpse of the infamous Raiders.

“Generally, they are far better looking men than any of the secesh prisoners we had here before. Those butternut suits and shapeless slouched hats, would make an ugly man of anybody. All the colors of Joseph’s coat were represented in their wearing apparel: the butternut was worn by the careless quiet looking individuals, who had their horse blankets and tin cups strung across their shoulders. But the keen, black eyed out-and-out raiders of the dare devil stripe, had either a suit of black broadcloth, or a portion of our own soldiers’ blue uniform.”

The following day, none other than Colonel Charles V. De Land was ordered to take command of Camp Douglas. Having been one of the officers that pursued and captured the Raiders, it was certain he would not look favorably upon his prisoners.

“Among the units chasing Morgan was the First Michigan Sharpshooters under Col. Charles V. De Land, aged 35. He entered the war as a captain in the Ninth Michigan Infantry in 1861 and saw some hard soldiering. Captured at Murfreesboro, Tennessee, he was the only Camp Douglas commandant to have seen a Southern prison. Perhaps this explains his harsh treatment of prisoners at Camp Douglas.” [vi]

John Hunt Morgan and the few Raiders who escaped capture at Buffington Island continued to move northward through Ohio. 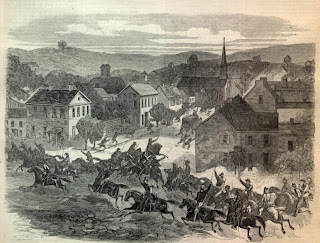 “Morgan’s Raid-Entry of Morgan’s Freebooters into Washington Ohio”[vii]
Those Raiders unfortunate enough to suffer capture and incarceration were being processed and sent to prison camps across the nation as a means to insure there would be no attempt at their rescue and less likelihood of a well organized mass escape attempt.

“As was the custom, the victor of a battle sent officers and enlisted men to separate prisons to prevent them from organizing a revolt. While their enlisted men were incarcerated in Chicago’s Camp Douglas, their commanding officers spent time at Fort Warren in Massachusetts and Johnson’s Island on Lake Erie.”[viii]
Curtis R. Burke arrived at Camp Douglas on Tuesday, August 18, 1863. He recorded his impressions in his journal:
"The guards said that we were going to Camp Douglas near Chicago, Ill. The cars run along the lake shore for some distance before we got to the suburbs of Chicago where we got out. I could see the city and a few sailing boats but no large crafts. We were marched about four hundred yards inland and arrived at the gate of Camp Douglas on Lake Street. I saw two street cars and several carriages of city folks waiting to see us. The gates swung open and in we marched. The camp appeared pretty large, with a high fence running around it. I saw a postoffice, barber shop, picture gallery, two sutler stores, a commissary house, and a chapel. The first square we entered was the Yankees quarters off to the left, with long barracks on the sides and flag pole in the center. Then we marched to another square that was vacant and they called it White Oak square. All of the barracks were long one story buildings. Four of them forming a square with a cook house on the outside of the square to each barrack and the length of the barrack."

On August 20, 1863 James Edward Evans was among a group placed aboard a railway car and transported to Camp Douglas in Chicago, Illinois. Here he languished for the next a year and a half as the Dix- Hill Cartel general exchange agreement had collapsed in July of 1863.[ix] The only remaining means of leaving the prison camp were death or taking the Oath of Allegiance.

“Prisoners were now stranded at Camp Douglas for the duration of the war. The cartel was dead, and the administration was skeptical about whether prisoners would honor the oath once released. For example, five of Morgan’s men earned jobs in the hospital by applying for the oath, but they promptly dug a tunnel and escaped.”[x]

It would not be impolite to describe Camp Douglas as a Hell Hole. From 1862–1865, more than 6,000 Confederate prisoners died from disease, starvation, and the bitter cold winters.[xi] Camp Douglas had not been not designed as a prison rather, it began as a training grounds for Federal troops. As a prison, it operated much like a minature city behind walls. Prisoners, guards, and sometimes paroled troops awaiting return to the front were all force to reside in appauling conditions. Situated in a biazzare location, Camp Douglas sat on swampy soil next to the University of Chicago. This land had been owned by Stephen Douglas and was donated to the city of Chicago upon his death.

“Survival at Camp Douglas depended upon many factors. Time and place of capture decided how much equipment and clothing a prisoner might save. Finding friends and forming groups for mutual aid, protection, and conversation was important.” [xii]

James Edward Evans was “lucky” enough to be in the company of other Raiders. What equipment and clothing he managed to bring to the camp is unknown. It is known that he was forced to drink from a contamined well upon his arrival.

“Only one water hydrant supplied the entire camp. It was not working when 558 thirsty prisoners arrived on August 20, causing them to use a contaminated well.” [xiii]

Once processed, the Raiders were assigned to crowded wooden bunk houses.

“The barracks were divided into little rooms with from two to ten bunks in each, and doors and windows to match, also one long room with a row of bunks on each side of the room, mostly three bunks deep or high, and making room for about eighty men.” 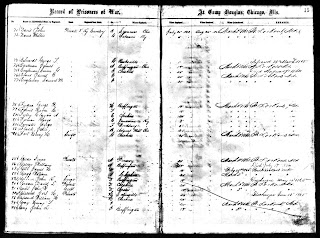 Record showing the James Edward Evans as a POW at Camp Douglas.
Curtis R. Burke also recorded that on Thursday, August 20, 1863:
"A good many citizens and ladies came to take a look at Morgan's men. In the evening Parson Orr held forth in the square and a good many of the boys attended, and service was given out for the next day."

With the influx of Raiders, the number of prisoners at Camp Douglas reached 3,100. Sadly, this was only the beginning of overcrowding at the camp.

“Unfortunately for the hapless De Land, not only were the conditions still very poor, but some of his new prisoners included members of John Hunt Morgan’s infamous raiders. These men proved especially adept at finding ways out of the camp, and under De Land’s command there were more than 150 escapes from Camp Douglas.”[xv] 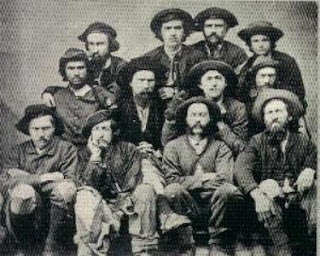 Ministers were allowed into Camp Douglas to preach sermons and distribute bibles. Some charitable groups, such as the YMCA and churches, took up donations to provide prisoners with blankets, clothing, food, medications, and cleaning supplies. The Chicago Bible Society supplied religious tracts to the prisoners.

“One Sunday Dr. Eddy was reading a verse to them: Show pity, Lord, O Lord, forgive; the next line was, Let a repenting rebel live. He quickly read it, Let a repenting sinner live, but the verse was well known to the prisoners. There was a roar of laughter and all serious attention vanished.”[xvii] 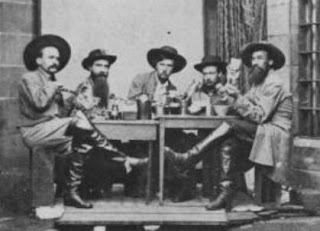 Raiders at a staged card game[xviii]