Running water sewers and toilets opened at Camp Douglas on November 6, 1863 creating a much more sanitary environment. Yet, no one appeared eager to remain in camp.

“Some of the men of Cluke’s and Johnson’s regiments in another square dug some underground passages for the purpose of escaping, and came near finishing them when some traitor told on them, and the Yanks marched them all out in the public square in front of headquarters and put a guard around them with the orders to shoot any person that sat down. The Yanks were trying to make the men tell who the headmen in the digging were. After standing several hours a guard fired into the crowd without cause, wounding three of Cluke’s regiment severely. I could not learn the truth about the affair. Some fifteen or twenty finally stepped out and acknowledged being the principal diggers and were sent to the dungeon. The rest were sent back to their barracks.”

Escapees were not the only source of excitement. A serious fire occurred in Garrison Square the evening of November 11th. Barracks, fences, and sutler’s shops burned down.

“About dinner time the Yankee barracks in the main square took fire and attracted a large crowd of prisoners. The Yanks got scared for fear the prisoners would try to break out and brought out the company of Indians belonging to the first Michigan sharp shooters. They loaded their guns, at the same time ordering the crowd to disperse to their quarters, and we did so on the double quick. The Indians came down and the white officer in command put them on guard around the square. Then [he] came in and notified us that if we left the square we would be shot. I could see the fire from the kitchen. The frame barracks and pitched roof made a heavy cloud of smoke. The fire was stopped by cutting the barracks in two, after burning about three hundred feet of barracks and kitchens. Some of the new fence and Mrs. Finley’s sutler’s store was burned also. Most everything in the building got burned as the fire spread rapidly. The fire was accidental and caught from a stove pipe.”

While, strictly copyrighted by the Chicago Historical Society, the Diary of Private William D. Huff contains a drawing of this fire. It is possible to download Huff’s drawings from the History Lab lesson plans in “The Civil War” Up Close and Personal” section entitled “Who is William Huff? Blueback or Grayback” and “Look Out My Window. What Do You See? [iii] The lesson plans may be accessed at http://www.chicagohistory.org/education/resources/history-lab/the-civil-war-up-close-and-personal 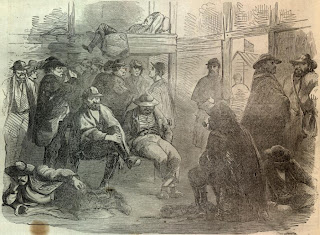 Unaccustomed to so much leisure time, many of the men fell prey to homesickness.

Their suffering was compounded by cuts to the rations. What little the prisoners still received was hardly fit to eat. Ninian Edwards, husband of Abraham Lincoln’s wife’s eldest sister, supplied the camp with inferior beef.[vi] Likewise, a Chicago baker cheated the prisoners by cutting the weight of a loaf of bread to two ounces.

“We draw fresh beef every other day, but it is not a number one article being mostly neck, flank, bones, and shanks.”

“Kentucky cavalrymen know as Morgan’s Raiders, named for Gen. John Hunt Morgan, worked diligently to escape and return to battle. One of Morgan’s Raiders, Samuel G. Grasty of Virginia, simply walked out of Camp Douglas to a friend’s house downtown and boarded a train for Richmond, but his fellow soldiers had to work harder to escape. One group of Morgan’s Raiders dug their way out of the dungeon, which was an extra-security prison, drawing admiration from guards for their ingenuity. Others hid their tools in a haystack at night and by daylight dug tunnels beneath their bunks to the other side of the perimeter fence.”[viii]

De Land became absolutely sadist in his punishment. He began hung prisoners by their thumbs and began shutting down the sutlers so that there was no means of procuring supplies save bribing guards.

“A prisoner of war's first duty is to survive; his second duty is to escape.” [ix]

“I saw men punished thus until they would grow so deathly sick that they would vomit all over themselves, their heads fall forward and almost every sign of life become extinct; the ends of their thumbs would burst open; a surgeon standing by would feel their pulse and say he thought they could stand it a little longer. Some times he would say they had better be cut down.”[x]

Abraham Lincoln delivered the Gettysburg address. In a few brief words, Lincoln gave dignity and honor to those who had fallen in battle and fostered resolve in the hearts of those destined to carry on.

"Four score and seven years ago our fathers brought forth on this continent a new nation, conceived in liberty and dedicated to the proposition that all men are created equal. Now we are engaged in a great civil war, testing whether that nation or any nation so conceived and so dedicated can long endure. We are met on a great battlefield of that war. We have come to dedicate a portion of that field as a final resting-place for those who here gave their lives that that nation might live. It is altogether fitting and proper that we should do this.

But in a larger sense, we cannot dedicate, we cannot consecrate, we cannot hallow this ground. The brave men, living and dead, who struggled here have consecrated it far above our poor power to add or detract. The world will little note nor long remember what we say here, but it can never forget what they did here. It is for us the living rather to be dedicated here to the unfinished work which they who fought here have thus far so nobly advanced. It is rather for us to be here dedicated to the great task remaining before us--that from these honored dead we take increased devotion to that cause for which they gave the last full measure of devotion--that we here highly resolve that these dead shall not have died in vain, that this nation under God shall have a new birth of freedom, and that government of the people, by the people, for the people shall not perish from the earth."

“Some rain fell. Col. De Land came down and called us all out in line [in] front of our barracks to look for tunnels. The barracks were searched, but no tunnels [were] found, and we were dismissed to return to our barracks.”[xi]

“About dark Col. De Land and Capt Rhines, our commissary of prisoners, came down and made the whole regiment fall out in line in front of the barracks. Then we were marched under guard about a hundred yards out of the square toward the sutlers store. The night was chilly and the most of us had thrown a blanket over us not knowing how long we would have to stand out. The Yanks were looking for some of Duke’s regiment who had dressed up to escape and come down to our square and had been reported by some traitor as being among the fourteenth KY. The Yanks caught Wm. Overton, Chas. Steel, and Tho’s Von [Thomas Vaughn?] dressed in citizens suits and marched them off to the guard house, and we were permitted to return to our barracks having been out about an hour and a half.”[xii]

Colonel De Land was back yet again on the evening of Sunday, November 22nd:

“An hour before dark my regiment was called out in line and marched to the main square in front of headquarters. The most of us did not know what it was for, but Col. De Land soon called for four or five men by name. Three were in ranks and stepped out. The Yankees said that these men had threatened to hang a man by the name of Stovall belonging to my regiment for telling on some of the boys that were trying to escape. The Yankees said that they would protect Stovall, and they tied the three men up by the thumbs to the railing of the stand around the flag pole. Then sent Pa (our Sergeant Major) and Sergeant Wm. Miller back to our quarters to find the other two men called for with the pleasing information that if they did not find the men soon that they would be tied up by the thumbs in their places. The men that were tied stood it over a half an hour in silence and then commenced groaning and howling. It made me almost sick to hear them. Several times the Yankee officers asked them if they were ready to tell what they knew, and they answered that they knew nothing to tell. A Yankee surgeon examined them to see how much they could stand. There were some citizens standing around and they tried to get Col. De Land to take the men down. The men were taken down after having been tied up so [long] that they had to partly tip toe for an hour. One of the boys fainted, and another threw up all over himself. Their names were James Allen, John Sweeny, and Wm. Wason. Col. De Land gave us a lecture about threatening any person that choose to tell of our escaping and told us to return to our quarters and find the other two men or he would surely bring us back and make us stand out all night. We returned to our quarters and the two men, who had just returned from a visit to another square went to headquarters and gave themselves up and received their share of the punishment. They were let down when this traitor Stovall said that he forgave them.”

Burke went on to mention that Stovall chose to remain in the protection of headquarters rather than returning to the regimental barracks.

During the Civil War, prisoners, both Northern and the Southern, often attempted escape. It was generally accepted as an obligation of the uniform. Even the United States Christian Committee of Maryland reported:

“It is the duty of the government to keep prisoners as securely as possible, but on the part of the prisoner, it is his right and his duty to escape just as quick as he can…” [xiii]

None of the punishments De Land concocted swayed his prisoners’ determination to escape. Thus, on November 24th, the frustrated colonel issued an order against it!

“A Yankee Sergeant at roll call read a strict order against our escaping.”[xiv]

On November 27th, after four months imprisonment in the Ohio penitentiary, John Hunt Morgan escaped with six of his officers. They too tunneled out, using table knifes to dig their way to freedom. Morgan donned civilian clothing then calmly boarded a train. Alas, it was necessary to seat himself next to a Union major! Only moments later the train glided past the penitentiary.

“‘That's where the rebel General Morgan is now imprisoned,’ said the major. ‘Indeed,’ replied the disguised Morgan, ‘I hope they'll always keep him as safely as they have him now.' "[xv]

Morgan made his way south eventually arriving in Richmond where he was received as a hero with a parade and two days of being lauded over by the Virginia legislature. His imprisoned men were forgotten.

Hi MB! I'm amazed at all you've done with this blog - have you thought of making a book of it?

Why thank you Dan. You flatter me. Have the name of a good agent?