You Gotta Sing When The Spirit Says Sing!

“Sung by both soldiers and by those who stayed behind, it was the songs that truly expressed the emotions, fired the patriotism, and filled the emptiness felt by leaving loved ones at home and facing death at every turn.”[i]

Creative Northerners vented their angst toward the Raiders by substituting John Morgan’s name for Jefferson Davis’ in a popular song of the day.

“Morgan's raiders were so feared that a song was frequently sung with the verse, ‘Hang John Morgan from a sour apple tree’."[ii]

The popular song , “John Brown’s Body,” was possibly based on an old Methodist hymn entitled, “Say, Brothers, Will You Meet Us On The Way?” As “John Brown’s Body” was a favorite Union marching song, countless verses developed over the years, including but not limited to:

The stars above in Heaven are a-lookin' kindly down,…

He's gone to be a soldier in the army of the Lord,…

John Brown's knapsack is strapped upon his back,…

His pet lambs will meet him on the way,…

They will hang Jeff Davis to a sour apple tree,…

These verses were united by a chorus which is quite similar to that of “The Battle Hymn of the Republic”:

Not to be out sung by Yankees, Morgan’s Men wrote a ballad extolling their leader and his deeds. 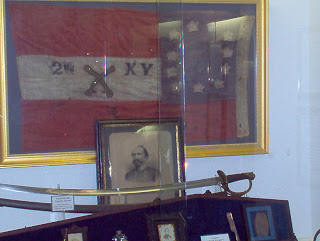 This banner used by the 2nd Kentucky Cavalry, CSA hangs in the War Memorial Museum of Mid America in Bardstown. Note Morgan’s likeness below the banner.

“John came in excellent style, to be sure,

With banner and brand came he;

His clattering hoofs made a terrible roar,

And his cannon numbering three.

The Hoosiers were scared, so entered the race,

What a rowdyish set were they;

And the Buckeyes mounted to join in the chase,

As Johnny galloped their way.

Ho! gather your flocks and sound the alarm

For the Partisan Rangers have come;

Bold knights of the road, they scour each farm

And scamper at tap of the drum.

How are you, Telegraph?” [iii] 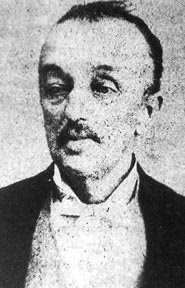 The last lines of the above song refer to Private George “Lightning” Ellsworth who would tap telegraph lines “and, pretending to be a Union telegrapher, send several messages giving different headings for the raiders and false reports of the size of Morgan's force — sometimes reporting it as high as 7,000 men. Ellsworth did this throughout the journey, especially in Indiana”[iv]

““The American propensity for musical self-expression reached its highest fulfillment during the terrible years of the Civil War. People on both sides of the battle lines placed great reliance on the songs, finding them a source of strength, courage, solace, hope, much-needed laughter, and a general escape valve for the unbearable tensions of their lives at a time of fratricidal slaughter.”[v]

It is important to bear in mind that song was a powerful propaganda tool at this time period. This was a time when not every American citizen had access to an education, much less a newspaper. Song, a popular form of entertainment, was much more likely to be heard and understood.

“In this way, music provides a weapon of social change which can be used to achieve specific goals because the lyrics, together with the melody and rhythms, take on different and more significant meanings than those that appear on the surface.”[vi]

That many Civil War songs are still familiar today speaks to their power to stir emotions within both the singer and the listening audience.

“America’s war songs and sea songs have played their part as incentives to patriotism, to enlistment in the ranks, to valor in the field and on the sea, and have served to inspire and cheer the fighting forces of the Republic. No country, as history proves, can afford to ignore the patriotic force capable of being brought into play through the power of music.”[vii]