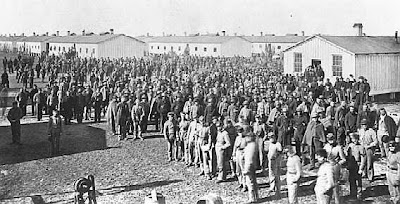 Prisoners at Camp Douglas circa 1864[i]

Any hopes that Colonel Benjamin Sweet, new commander of Camp Douglas, would show more mercy than Strong were purely in vain. Sweet quickly became known as a strict displinarian, increasing the already harsh punishments.[ii] Sweet forbid prisoners to receive boots in package from home. Further, Sweet eliminated candles from the rations citing that the prisoners had been using candles when attempting to tunnel out. He refused to to hear logical arguments that candles were used to light the barracks and hospital after dark.[iii] Reductions in the prisoner’s rations were made as money saving matters. Saving money impressed the higher uppers and Sweet was a career minded man who took great pains to the curry favor of his superiors.

“His tenure in command was marked by a zealous enaction of punitive measures endorsed by higher Union authorities. His measures resulted in the deaths of over 5,000 rebel prisoners.”[iv]

Sweet’s one show of concern was for his for his twelve year old daughter, Ada. His father's heart over came his ambition when he selected not to live at camp.[v] Officers often selected to have their children live away from the camp due to disease and poor sanitation. However, they themselves were expected to take up residence upon commision.

The camp itself continued to collect curious crowds of “sight seers.”

“Thursday May 5th, 1864. Weather pleasant. A procession of thirty citizens walked in two ranks through the principal part of camp headed by Major Skinner. A prisoner put on citizens cloths and came near passing out the gate with them as they left and escaping, but some short minded prisoner in the crowd standing by hollowed at him and caused the Yanks to notice him, and ordered him back. Notice was givien us that no more lights would be allowed after sun down, and we must go early to bed.”

Sweet, concerned that prisoners might attempt to bribe guards if they were allowed to retain cash, ordered daily searches of the prisoners and of their barracks. Sweet also insisted that all money currently in the hands of prisoners be placed in a camp banking system. Most prisoners refused to do so as they found their own hiding places far more secure. When Hoffman, who had not been consulted regarding this new banking system, learned of Sweet’s actions; he promptly canceled Sweet’s banking system.[vii] Sweet, who had his eye on moving up the ranks, was very careful to never disappoint his superior again.

Rumors and underground gossip continued to circulate amongst the prisoners. There was talk of the sutler being forced out and replaced by a friend of Colonel Sweet’s, the possible reasons behind the rising price of gold, and the results of Battle of the Wilderness and various engagements near Spotsylvania, Virginia.

“We are all very eager to hear the news of the great battle between Gens. Grant and Lee in front of Richmond, Virginia. We are confident of Lee’s success and the impregnability of Richmond.”

Diseases continued to take their toll on the prisoner population. Burke sorrowfully recorded that his father, Elijah Watkins, and William Gibbons had made a “neat wooden marker” for the grave of their comrade William Wasson. It is unclear that the marker was ever placed as Burke further recorded that the bodies of smallpox victims were not allowed to be moved for a prescribed period after death.

“Tuesday May 24th, 1864. Weather pleasant. At roll call we were notified to fall out again at 1 o’clock p. m. to have a general count. Most of us donned out best cloths as a precautionary measure, as we expected to have the barracks searched during our absence. At the appointed time the bugle sounded and we fell in line. The different regiments and squads all marched into out square and were formed in lines running parallel with our own. There was ten or twelve lines two deep, each stretching across the prison square making quite a show of Confederate troops. The Daguerreanist then took a picture of the whole crowd. We were counted off and divided into squads of one hundred and sixty-five each. A small squad had to be added to the old fourteenth to make the required number. Companies E, F, and Scott’s men formed a squad with Sergeant John H. Miller in charge of them. Pa has only to attend to our squad. We were out four hours but were allowed to sit down part of the time. After we were dismissed I learned that the total was 5,227 prisoners in camp. Gold is quoted at $ 1.85 ½ today.”

On this day Sweet began to institute ruthless changes he felt were need to prevent escapes. While some of the changes appeared quite logical, others were additional money saving ploys. Major Skinner lobbied for the elimination of tea while Ninian Edwards, of the infamous beef scandal, advocated the exclusion of rice and vinegar. The prisoner’s rations no longer prevented scurvy. If the men could not manage to supplement their diets with food purchased from the sutler, bartered with other prisoners, or received in packages from home, they became seriously ill. Almost everyone went hungry. Some were literally starving.

“… starvation was carried on quite systematically. Our rations for breakfast consisted of five ounces of bread and six ounces of fresh beef. As the rations for two hundred men were boiled in a sixty-gallon kettle, it was necessary in order to cook it done, to boil it to shreds. In fact there was no more nutritious matter in it than in an old dish cloth, for dinner one pint bean soup and five ounces of bread, this was our living. This was not regularly issued, for the slightest offence would cause the captain's direful anger to be aroused, and as he would make most by stopping our rations this was quite a favorite punishment.”

Under constant stress brought on by over work, over crowding, abusive punishments, lack of sanitary conditions, and lack of food; the prisoners sometimes took out their frustration upon each other. Burke recorded a fist fight which took place between Joseph McCarney and Doctor Scroggin who were both residents of “Smith’s barracks.” The doctor’s brother, Abner Scroggin, joined the fray. This prompted McCarney to draw his knife. As the fighting continued, McCarney cut both brothers. Abner Scroggins, the most injured party in the fight, went to the drug store while Joseph McCarney was spotted in the square and conscripted to fill dirt carts. When news of the fight reached Lieutenant Proseus, he and a sergeant sought out McCarney for questioning. As the sergeant drew his gun, Lieutenant Proseus relieved McCarney of his knife. McCarney was then hit, kicked, and ordered to “the dungeon.” A group of officers gathered before the dungeon and discussed the matter. As a crowd of prisoners looked on, McCarney was pulled from the dungeon, strip searched, and beaten one more. Patrols drew their guns and ordered the crowd of prisoners back to their quarters. Meanwhile Doctor Scroggin’s wounds had been dressed and Abner Scroggin had been sent to the camp hospital by ambulance. Less than a week later, Abner Scroggin died.

Conscription into work gangs was relentless. Sweet had selected to continue the barracks reconfiguration begun by Orme. Ruthless guards selected any prison that looked idle or appeared to be spreading camp gossip for work details. Burke recorded that the work was hot and hard and worse by the scarcity of drinking water.

“Sweet completed another rearrangement of Prisoner’s Square on June 1, with streets 50 feet wide and four barracks on a street. This arrangement moved them away from the fence and prevented tunneling. Thirty-two barracks sat on blocks, and prisoners white washed them inside and out. They measured 90 feet long, including a 20 foot add-on kitchen, and could house 165 men with two to a bunk.”[xii]

The grounds, which had been a sea of mud all spring, became an arid dust bowl as summer approached.

“Monday May 30th, 1864. Weather windy. I volunteered to help push a barrack that was on its way across the square. I worked two hours and quit. We drew rations for ten days. The following is what my mess of eight gets for the ten days: meal 24 cups, pickle-pork 22 lbs, hominy 4 qts, fresh beef 18 lbs, light bread 24 loaves, parched coffee 4 pts, molasses 3 pts, sugar 5 pints, salt 1 qts, potatoes, 1 peck. No soap flour candles, pepper, peas, beans, or vinegar were issued this time. Our beef and bread is not issued all at once, but we draw them in three different drawings during the ten days, so that we get them tolerable fresh. It is impossible to stand out five minutes without getting our eyes and faces full of sand and dust. I notice that nearly all the Yanks wear green goggles to protect their eyes. The sand blows about in drifts. I often think that the Yanks were not much to blame for wishing to go prospecting in the South, as their own country at least this part of it is not fit to live in. Gold is quoted by the evening papers at $1.91 ¼. A considerable rise.