Johnny Has Gone For a Soldier 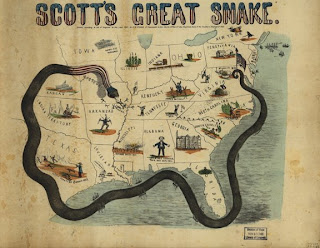 “With fife and drum he marched away
He would not heed what I did say
He'll not come back for many a day
Johnny has gone for a soldier.” [ii]

During the first few days of the Civil War, Northern religious leaders, ever the lions of the pulpit, seized upon a critical moment indoctrinate their flocks.

“After Confederate forces opened fire on Fort Sumter in April 1861, the vast majority of Northern religious bodies—with the exception of the historic "peace" churches which on principle adhered to pacifism—ardently supported the war for the Union.” [iii]

In Washington, President Lincoln issued a proclamation announcing an "insurrection," and called for 75,000 troops to be raised. The U. S. Secretary of War, Simon Cameron, called upon the Commonwealth of Kentucky to produce four regiments to join the Union army. Kentucky’s Governor, Beriah Magoffin, flatly refused the request.

“I will send not a man, nor a dollar, for the wicked purpose of subduing my sister Southern states.”
~ Governor Beriah Magoffin [iv]

The following week, Magoffin, true to his netrual stance, rejected a similar call for troops from Confederate President Jefferson Davis.

Religious leaders were also forced to turned the focus of their attention to the war.

This is fascinating & concise Mary Beth. The heading reminded me that my Rhode Island folksinger friends, Aubrey Atwater and Elwood Donnelly are busy making a new recording that includes several songs that I composed, including "Soldier's Round" - an assemblage of traditional lyrics and tunes connected by "Johnny Has Gone For a Soldier" and "Soldier's Joy." http://www.atwater-donnelly.com/

Aubrey sang in 2 of The Secret Commonwealth performances, and on 3 of the recordings.

Today I am thinking of the interconnectedness of all things: Your Pete watching the battle my James was in, an Old Irish folksong living and reverberating through 200 plus years, Dia de los Muertos looming and the arrival of a macabre cut and paste letter from father telling me he “does not wish to communicate.”

When we try to pick anything out by itself, we find it
hitched to everything else in the universe.
- John Muir

The Web of Life, The Dance of Death ~ Is there really any difference? The veil of illusions so often covers my mortal eyes! Oh to reach that centered, all seeing, eternally balanced spot within while the world swirls about me in chaos!

How can we fret and stew sub specie aeternitatis - under the calm gaze of ancient Tao? The salt of the sea is in our blood; the calcium of the rocks is in our bones; the genes of ten thousand generations of stalwart progenitors are in our cells. The sun shines and we smile. The winds rage and we bend before them. The blossoms open and we rejoice. Earth is our long home.
- Stewart W. Holmes, 1973