What Have We Gotten Ourselves Into? 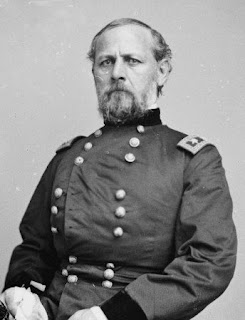 Few men, Northern or Southern, realized the gravity of the war they had entered.
“Everyone in Washington believed that the war would end quickly. The North claimed the loyalty of twenty-three states with a population of 22 million. The eleven states of the Confederacy had about 9 million people and nearly 4 million of them were slaves. The South was mainly agricultural. The North had factories to produce ammunition and guns, a network of railroads to transport troops, and a powerful navy that could blockade Southern ports.
But if the North had most of the industry and population, the South held a monopoly on military talent. Jefferson Davis, the Confederate president, was a professional soldier. And Southerners made a high proportion of the country’s skilled military commanders. Lincoln’s biggest headache during the early years of the war would be to find competent generals who could lead the union to victory.” [i]
October 8, 1861
Lincoln rued his lack of capable officers. Thus, after critical refection on the best use of the leaders he had, strategical changes were made. U. S. Brigadier General Don Carlos Buell replaced General William T. Sherman as commander of the Department of the Cumberland, responsible for the Federal military in Kentucky.
"The object is not to fight great battles, and storm impregnable fortifications, but by demonstrations and maneuvering to prevent the enemy from concentrating his scattered forces... [T]he commander merits condemnation who, from ambition or ignorance or a weak submission to the dictation of popular clamor and without necessity or profit, has squandered the lives of his soldiers."
~ Brigadier General Don Carlos Buell
October 14, 1861
General Sherman took over responsibility for Federal military preparations and operations in Kentucky from Gen. Robert Anderson.
Poor Lincoln, doomed to be vexed with military leadership throughout the war, reached the point of exasperation. In desperation, he resolved to take matters into his own hands. Lincoln made himself into a true Commander-in-Chief.
“By now, the president had serious misgivings about the professional soldiers who were running the war. He had collected a library of books on military strategy, and he studied them late into the night, just as he had once studied law and surveying. Attorney General Edward Bates had told Lincoln that it was his presidential duty to ‘command the commanders….The nation requires it, and history will hold you responsible.’ Lincoln began to play an active role in the day-today conduct of the war, planning strategy and sometimes directing tactical maneuvers in the field.”[ii]
Resourcefulness was also needed when searching for the capitol needed to finance the war.
“Largely thanks to Cooke [Jay Cooke], The North was able to throw much of the cost of the war onto the future, raising two-thirds of its revenues in the war years by selling bonds. The Confederacy, with a far smaller middle class, few large banks, and little financial expertise, was able to raise only about 40 percent of its revenues through borrowing. The situation for the South was made worse by the fact that the South had an economy notoriously lacking in liquidity. Thus the South’s wealth could not be easily translated into money and spent on war materiel. While the South had 30 percent of the country’s total assets at the outbreak of the war, it had only about 12 percent of the circulating currency and 21 percent of the banking assets. The word land-poor was not invented until Reconstruction days, but it also described the Southern economy in 1861.” [iii]
October 21, 1861
The Confederacy wasn’t always doing so well on the battle field either.
The Battle of Camp Wildcat, fought in Laurel County, Kentucky was one of the earliest engagements of the Civil War. Confederate forces under the leadership of Brig. Gen. Felix Zollicoffer moved up from Tennessee through the Cumberland Gap. They were repelled by Union troops under the command of Col. Theophilous T. Garrard and reinforcements under the command of Brig. Gen. Albin F. Schoepf. The battle resulted in Union victory.
Yet, nothing dimmed the resolved of “Johnny Reb.” The men who had become Confederate soldiers believed themselves to be fighting for the right of their people to govern themselves and fend off a foreign invasion of their sovereign soil.
"The rank and file were chiefly farmers and small merchants, comparatively very few were owners of slaves; but they were all descended from ancestors whose fortunes and blood had been freely spent in the war of the revolution; they volunteered in obedience to the call of their state to resist invasion; they came with a firm determination to do their full duty."
~ Capt. Wm. H. S. Burgwyn, 35th Regiment, North Carolina Troops

"In the Civil War, the common soldiers of both sides were the same sort of people; untrained and untaught young men, mostly from the country. There weren't many cities then, and they weren't very large, so the average soldier generally came from either a farm or from some very small town or rural area. He had never been anywhere; he was completely unsophisticated. He joined up because he wanted to, because his patriotism had been aroused. The bands were playing, the recruiting officers were making speeches, so he got stirred up and enlisted. Sometimes, he was not altogether dry behind the ears." [iv]
ENDNOTES
[i] Freedman, Russell “ Lincoln: A Photobiography,” 1987, pages 73 -74.
[ii] Ibid. pages 78-79.
[iii] Gordon, John Steele. “An Empire of Wealth: The Epic history of American Economic Power”, p 194.
[iv] Catton, Bruce. “Reflections on the Civil War.”
Posted by Mary Beth at 1:12 PM