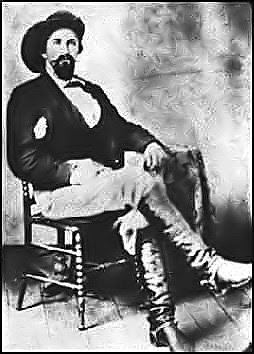 A clever man, John Hunt Morgan realized that by wearing civilian clothing without any symbols of rank, he could pose as a businessman or Union officer and slip away unnoticed when caught in thorny situations.

By the spring of 1863, John Hunt Morgan had public acclaim, a stunning new wife, and had recently been promoted. Yet, Morgan was not content. He aspired to a position in history far grater than that of Brigadier General in the Army of Tennessee.

Indisposed to remaining a subordinate officer, Morgan was plotting a path to greater glory. He began by exploiting the fact that his senior officer, General Pegram, was incompetent and generally disliked.

While Pegram had difficulties relating to volunteers who lacked formal military training, Morgan had the common touch. His men’s adulation bordered on hero worship.

“Morgan was in the zenith of his fame. I was inoculated with the idea that his judgment was unerring and that the ‘King could do no wrong.’ In the mortal apprehension I never once thought of trusting in God for safety, but wholly relied upon the wisdom and skill of John Morgan."

In late April 1863, Morgan dispatched scouts north to the Ohio River to seek spots in which it would be possible to ford the river. Morgan was putting the first steps of his Machiavellian grab for eternal acclaim into action. Morgan planned to take the war to Northern soil.

Morgan relished public acclaim. On May 1, 1863, the Confederate Congress issued the following statement regarding Morgan’s Men:

“entitled to the love and gratitude of their countrymen for the magnificent feat preserving Middle Tennessee for the Government.” [i]

It was considered the pinnacle of tribute to be mentioned in dispatches and receive Congressional commendation. Yet, even this public praise was not enough to satiate Morgan’s thirst for prominence.

The price a warrior pays for renown is constantly placing his life in danger.

On May 10, 1863, “Stonewall” Jackson was accidentally shot by his own men. Ironically, Jackson said,

“My religious belief teaches me to feel as safe in battle as in bed. God has fixed the time of my death."

When Jackson realized he was going to die, he calmly stated,

“I always wanted to die on a Sunday.”[ii]

What effect did Jackson’s death had a profound effect on the Confederacy and became the subject of popular poems and ballads. Was the memorializing of “Stonewall” motivational to Morgan’s schemes?
Why did John Hunt Morgan plan the Great Raid? What were his objectives? There are several theories as to his motivations:

Did Morgan’s superior officers know of his plan to cross the Ohio River? As even the men in Morgan's command didn't always know their destination until after they arrived, it is entirely possible that the only person Morgan entrusted with the full details of his plan was his brother-in-law Basil Duke. General Wheeler, Morgan's immediate superior, twice gave his permission for Morgan to raid as far north as Louisville. He did not seem aware of Morgan’s plan cross the Ohio River and continue northward.[ix] General Bragg however seemed far more aware of Morgan’s intent.

“Go ahead and raid Kentucky. Capture Louisville if you can. But do not, I repeat do not cross the river. Stay in Kentucky. Go anywhere you want in your home state, but I command you to stay south of the river.”


Lester Horwitz puts forward yet another theory of what motivated Morgan to cross the Ohio River.

"But Morgan went against orders and crossed the Ohio. The reason was that earlier, a Union cavalry officer had gone behind Confederate lines in a raid. Morgan said he would show them.

It was his ego that drove him to cross the river to show he was as good or better. Morgan rode more than 1,000 miles to prove it." [xi]

One clear motivation was Morgan’s covetous of command.

"I can only wish that you were permanently in command of my cavalry; and should I have the good fortune to have you assigned to command, I will so arrange it. In the mean time, I am informed that General Pegram, at present in command of the cavalry of this department, is your senior…With your consent, I will endeavor, at the proper time, to obtain your transfer to my department."

Possessing a very high opinion of his capabilities, Morgan was quite difficult to command. Consequently, Pegram and Morgan did not have an amiable working relationship.

“…General Morgan is your junior... You are aware of the feeling which exists in some irregular organizations in reference to being commanded by regular officers. In your relations with the troops, even more than with General Morgan, you should endeavor to conciliate that feeling. I have written to General Morgan, informing him that I have a right to expect from him a hearty co-operation with you as his senior. I feel assured that you will receive from General Morgan his able and hearty support, if you show toward him and his command the proper consideration and a spirit of great conciliation.”

~ A letter from Major General Simon Bolivar Buckner to Pegram on May 15, 1863


Such reconciliation was not to be! Morgan’s desires were far too great to be appeased by mere platitudes.