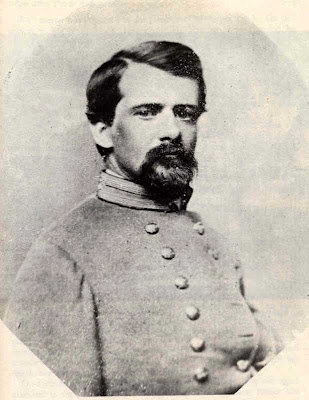 Brigadier General John Pegram, a Virginian educated at West Point, was highly unpopular with his subordinates.
"A competent leader can get efficient service from poor troops, while on the contrary an incapable leader can demoralize the best of troops."
~General John J. Pershing
John Pegram seemed to possess the makings of an ideal officer. He came from a well respected Virginia family, had graduated tenth in his class at West Point, had Cavalry experience and even spent time in Europe observing the war between Italy and Austria. Yet, with all the right credentials, Pegram struggled in leadership roles.
From the beginning, Pegram’s superior attitude and sense of entitlement led to disagreements.
Rather than accept the first position offered when enlisting with the Confederacy, Pegram negotiated for months, wrangling the best possible deal. When finally commissioned as a Lieutenant Colonel in July of 1861, Pegram was sent to western Virginia to serve in Brigadier General Richard Garnett’s command. Upon his arrival, Pegram incurred the disregard of his fellow officers by disputing matters of seniority.[i]
Pegram’s inability to get along with others also led to disgrace on the battlefield. In August 1861, while defending a mountain pass, Pegram refused to heed intelligence from his subordinate officer.
"…Not long after the sounds of axes could be heard on the left of Camp Garnett as well. Captain Higginbotham heard the chopping on his left, and twice sent word…to Pegram. The Captain was curtly told ‘to mind his own business.’ This ended any further communications between the two officers…" [ii]
Moments later the arrogant Pegram was astonished to find Union forces attacked from his left. Flustered to the point of being unable to counter balance the attack, Pegram’s unit was quickly flanked and cut off from Garnett’s main force. Pegram panicked. Lost and completely disoriented, he abandoned any attempt at escape in favor of surrender. Thus, Pegram became the first former U.S. Army officer captured during the Civil War. He spent the next six months as “a guest of the North.”[iii]
After his parole, Pegram lobbied Richmond for promotion to general. He was instead promoted to Colonel and briefly served as a military engineer for Pierre G. T. Beauregard. He was quickly reassigned as Lieutenant General Edmund Kirby Smith’s Chief of Staff during Kirby Smith’s unsuccessful raid into Kentucky.[iv]
In November 1862, Pegram was entrusted by Kirby Smith as one of three cavalry brigade commanders. The small brigade was a rag-tag lot, composed, at various times, of the 1st Louisiana, 1st Georgia, 1st Florida, 1st and 2nd Tennessee Cavalry Regiments, the 16th Tennessee Cavalry Battalion, and Huwald’s Tennessee Artillery Battalion.[v]
The other commanders selected by Kirby Smith, John Hunt Morgan and Colonel John S. Scott, found Pegram difficult to work with. The complaints appear to have stemmed from cultural clashes between the well bred Virginian who insisted on polished manners and the somewhat rougher “western ways” of officers from Kentucky and Tennessee. Pegram, accustomed to the gentile nobility of Richmond’s high society and the unlimited wealth of planters looked down his nose at officers he considered to be little more than uneducated farmers and poor mountaineers. Likewise, these patriotic volunteers resented this West pointer who couldn’t seem to handle leading a group of eager but untrained young men.
A superior attitude does not become an officer. Inability to work with fellow officers, poor personal relations with the enlisted men, and a reprehensible lack of planning and execution doomed Pegram to failure.
“But there was something wrong about his generalship. His relations with non-Virginians and volunteers were strained. His judgment on the battlefield, especially when in independent duty outside the direct supervision of his commander, was often poor.”[vi]
Brigadier General John Wharton began to question Pegram’s ability to employ artillery effectively.[vii]
Tensions increased when Colonel Scott was assigned to Pegram, a move that cause Scott to feel demoted.
Pegram's brigade was assigned to picket the Cumberland River and defend two northern Tennessee counties.
In early 1863, Pegram was selected to lead a nine day cavalry raid into Kentucky. It was during this raid that the displeasure of his subordinates became overt. Colonels Henry M. Ashby of the 1st Tennessee and John S. Scott of the 1st Louisiana openly questioned Pegram’s tactical decisiveness. John Hunt Morgan joined these men in their unrestrained criticism of their leader.
“…There was no fault to be found with the valor of the men who composed it [the Army of Tennessee]. But its history is one long tragic story of changing commanders, of bickering and wrangling among its leaders, of victories whose fruits were not gathered, of defeats which by a slight turn of fortune’s wheel might have been signal victories – a discouraging succession of disappointments and might-have-beens.”[viii]

March 19, 1863
Huwald’s Tennessee Battery and Pegram's Brigade were en route to Kentucky.
“The Division of Cavalry, commanded by Gen. John Pegram, to which my battery of Horse artillery was attached,….”
~Captain Gust. A. Huwald
Pegram would march as far north as Danville.[ix]
March 25, 1863
The Union seemed unperturbed by this latest raid.
“Wednesday, March 25
Rebels reported at Danville 2,000 strong. Sent out on picket with nine men in charge. See nothing of importance. Part of pickets on mud road which is almost impassable in wagon train start for Lexington.”