“We attacked Corydon this evening, and, after a tolerable severe fight for two hours, took the place and several hundred prisoners. Thence to Salisberry, where we bivouacked for a few hours.”

Early on July 9th, John Hunt Morgan selected his brother Colonel Richard “Dick” Morgan to lead a group of scouts northward over the Mauckport Road. About twelve miles from their crossing point, south of town of Corydon, the Raiders found their way blocked the Harrison County Home Guard who had barricaded themselves behind fallen logs. This small force of 450 men, officially designated as the 6th Regiment, Indiana Legion was under the command of Colonel Lewis Jordan. Jordan had positioned his men to block access to Corydon from the south. While a number of the Home Guard had the advantage of being equipped with Henry rifles which could fire 14 rounds without reloading, the Raiders outnumbered the little Indiana force by four to one. Morgan used his Parrot guns to further his advantage. The Hoosiers were outflanked and captured in under an hour. Having made short work of the battle, the Raiders marched their prisoners into Corydon. 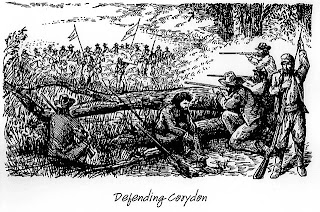 Sketch of the Corydon Battlefield[ii]

Morgan was in his glory in Corydon. He paroled his prisoners and demanded a ransom for the town. The Harrison County treasury was emptied of $690. Unsatisfied, he demanded “contributions” of $1,000 each from the three mills to spare them from being burned. He then demanded $600 each from the town’s two leading stores. These payments however did not prevent the Raiders from “collecting the spoils of victory.” Stores were looted, private homes pillaged and women ordered to empty their pantries and prepare meals. Morgan made his headquarters at the town's main hotel, while his men procured fresh horses. Local reports claimed that over 500 horses were taken.

“On the doubly memorable ninth of July a visit was paid to the citizens of Corydon and vicinity by Morgan and his herd of horse thieves. We heard Tuesday night that they had crossed the river and had disgraced the soil of Indiana with their most unhallowed feet. Our home guards skirmished with the rebs from the river to C. [Corydon] and on one of the hills overlooking the town had a grand battle. The battle raged violently for thirty minutes, just think of it! And on account of the large number of the rebs we were forced to retire which our men did in good earnest every one seemed determined to get out of town first but which succeeded remains undecided to this day. After the general skedaddle, Col. Jordan wisely put up the white Flag--and we were prisoners to a horde of thieves and murderers. I don't want you to think I am making fun of our brave home guards for I am not in the least, but now that all the danger is over, it is real funny to think how our men did run. Gen. Carrington awarded great praise to us and we all think that is something. What could 350 un-drilled home guards and citizens do against 4,000 well drilled and disciplined soldiers We did not even know Hobson was following him. We sent to New Albany time and again for help and not one man or gun did they send us. Though we have found out since that it was the fault of Gen Boyle and not the people of New Albany. It made Morgan so mad to think a few Home guards dared to fight his men I am glad they done it just to spite him. However they captured most of the guards and paroled them and killed three of our men. Father was out fighting with his Henry rifle but they did not get him or his gun. One of Morgan’s spies was in town three or four weeks visiting his relatives and some of his men helped our men to build the entrenchments I guess none of the rebels down south are that accommodating are they? One of our brave boys run three miles from the rebels, and really run himself to death. He stopped at a house and fainted and never came to. Didn’t he deserve a promotion? I think that was the awfullest [sic] day I ever passed in my life. ”

“I may state here that the numerous papers of Indiana were telling the people that Morgan's men were killing women and children and burning houses and destroying everything. These reports of course were false. But it scared the people almost crazy, consequently, they all or most of them left home. We would often see men, women and children running away across the fields and we would run after them and take the men behind us on our horses to some Capt. or Colonel who would parole them, the women and children would be frightened almost to death. We would tell them to return home that we were not fighting them or private citizen and would not hurt anyone who were not soldiers. Houses were deserted, door left opened, they left in such haste. Of course we had strict orders from General Morgan not to take anything, but we often visited the pantry and such good food, bread and meats, butter, honey, fruits, preserves and such. After passing through Corydon a few miles, as we was passing a large house an old man about 80 years old come out on the porch to our left, shot at the men at the head of the column, as they passed by. I saw him when he fired his gun, but was back in the column 4 or 5 hundred yards. The boys in front of the house shot at him and wounded him slightly in the cheek. They charged the house, took his gun and broke it. He sat down in a chair on the porch and looked at us pass by. The lady of the house could not get him to go into the house. His age saved him: he wounded one man slightly. We all admired his courage and bravery but not his judgment.”

While taking a meal at Jacob W. Kintner’s Eagle Hotel, John Hunt Morgan was brought a local newspaper by the innkeeper’s daughter. Morgan’s face filled with gloom as he read of the Confederate defeats at Gettysburg and Vicksburg.[v] Now there was no hope of joining forces with Lees and riding off into the pages of history. Morgan’s scheme of grandeur was undone.

INDIANAPOLIS, July 9. – Morgan’s forces consisting of infantry, artillery and cavalry and numbering between 6,000 and 8,000 crossed into Indiana and captured Corydon. Our forces are falling back. It is supposed the rebels are marching on New Albany and Jeffersonville, where large quanties of supplies are stored. Troops are being organized throughout the State and sent forward as rapidly as possible. Business was entirely suspended here today, and the citizens were forming companies for self defense. One regiment has been raised since last night. It is reported that two citizens were killed at Corydon when the rebels entered the town.

Reports of dead and wounded include four of Jordan’s men killed during the battle and 10 -12 Union men wounded. Civilian fatalities included a toll keeper shot while tending his gate, a Lutheran Minister shot on his farm, and two women who died of “exhaustion.” The Raiders counted eleven dead and forty wounded. The Presbyterian Church on Capitol Avenue was pressed into service as the Confederate hospital where Morgan left his wounded in the care of the townspeople. Ordering his men to remount, Morgan pressed his main column northward toward New Salisbury. A number of details were sent out to search for fresh horses, food, and supplies including replacements for tattered clothes, shoes and hats. Other groups splintered off to plunder as they past small villages. The main column past through New Salisbury and camped south of Palmyra sending only a few hours on sleep. Early in the morning of July 10th, the Raiders regrouped in Salem before continuing their march.

“General Hobson’s pursuing column, of which the Seventh Ohio Cavalry was a part, arrived at Corydon a few hours after Morgan’s departure. The citizens of Indiana received us with the greatest joy and enthusiasm; and from the time of our arrival at Corydon until the end of our march at Buffington Island, Ohio, (a distance of about three hundred miles,) our line of march was between two lines of patriotic people, occupying each side of the road – men, women, and children – laden with good things for us to eat, the principal article being fried chicken. In truth and literally, there were six hundred miles of fired chicken! The reader may be inclined to look upon this statement as a ‘Cavalryman’s yarn’ or an exaggeration, but I trust it will not be so considered. I am surprised at my moderation in thus describing the fried chicken prepared for us on this march. In view of the fact that whichsoever way we turned or whatsoever road we followed, the women of Indiana and Ohio met us promptly with the greatest abundance of fried chicken I am inclined to think that it would be entirely within bounds of truth if I described the same as ‘Six Hundred Square Miles of Fried Chicken.’”