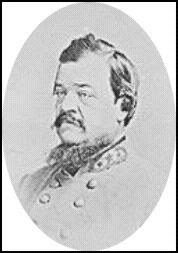 “HEADQUARTERS BUFORD'S CAVALRY BRIGADE, Camp near Beech Grove, Tenn., January 11, 1863
GENERAL: I have the honor herewith to forward report of my brigade during the battle of Murfreesboro, Tenn.
My brigade, composed of Colonel D. Howard Smith's regiment (5th Kentucky), assigned for duty with Colonel J. Warren Grigsby (6th Kentucky), numbering 220 effective men, Colonel Grigsby's regiment, 230, and Colonel J.R. Butler (3rd Kentucky), 180 men, in all 631 effective men, in accordance with orders from the general commanding moved to Rover, 18 miles southwest of Murfreesboro, on the Shelbyville and Nashville pike, where I remained until Wednesday, 31st [ultimo].
Having received an order from General Bragg to move upon the enemy's flank and be ready for a vigorous pursuit, delivered at 12 m. Tuesday night (30th), I moved at daylight Wednesday morning (31st), and reached the battle-field at 12 m., taking position on the extreme left. I there joined General Wheeler, and, in concert with in, moved rapidly along the enemy's flank, my brigade being in advance, until we encountered a force of the enemy, consisting of artillery, cavalry, and infantry, escorting a large wagon train, the enemy occupying quite a strong position on a hill near Miller's. I immediately disposed my command for an attack, threw forward Captain T. H. Shanks' company (Company B, 6th Kentucky), of Colonel Grigsby's regiment, as skirmishers, and formed the brigade in line of battle, Colonel Butler on the right, threatening the enemy's flank, and Colonel Grigsby on the left, in front of the enemy's lines. The attack was opened by our skirmishers, the enemy replying with artillery. After firing a few rounds, I received an order from General Wheeler to withdraw my brigade.
In this skirmish I lost 1 man (private of Colonel Butler's regiment) killed and 3 wounded; 2 horses killed and 2 disabled. We captured some 30 prisoners, who were paroled on the field.
Having withdrawn my force in good order, and acting in conjunction with General Wheeler, I moved back on the right toward and on the Wilkinson pike, on the left flank of Overall's Creek, near Mrs. Washington's. Here we found the enemy posted on the right bank of the creek, under cover of the woods. General Wheeler, on the right bank, attacked them, and I immediately drew up Colonel Grigsby's regiment (holding Colonel Butler's in reserve) on the right flank of the enemy, crossed the creek, charged the enemy, and drove him back with severe loss upon the lines of his heavy infantry.
My loss was here 2 commissioned officers (Major Chenoweth, 3rd Kentucky and Captain William Campbell, Co. F, 6th Kentucky) and 6 privates wounded. We captured some 10 or 15 prisoners, who were paroled on the field.
Night coming on, my brigade was withdrawn from the field, receiving orders to move the next day (Thursday), in conjunction with Generals Wheeler and Wharton, to the rear of the enemy. Uniting my brigade with theirs, I marched to LaVergne, co-operating with them in capturing and destroying a large number of wagons laded with commissary and quartermaster's stores, taking a large number of prisoners. Ninety-five of the 22nd Indiana Infantry came out and voluntarily surrendered to Lieutenant D. E. Myers, who was alone a short distance in front of his command.
I returned the next morning (Friday) to my original position on the left of our line of battle, near Mrs. Washington's, and remained there during the day, with no material results. At 9 a.m. I was ordered again to co-operate with General Wheeler in rear of the enemy, and moved at once. We encountered the enemy near Cox's Hill, about 8 miles from Nashville, on the Nashville and Murfreesboro pike. My brigade being in the rear, found on arriving that General Wheeler had already engaged the enemy, who was drawn up along the pike, his cavalry opposite the right wing of my brigade, which I wad moved into a corn-field adjoining the pike. Receiving an order from General Wheeler to move back to the woodland skirting the field, I did so, to support the attack in which he was engaged. I drew up the brigade, dismounted them to act as skirmishers, preparatory to an attack on the enemy's left. Before engaging, I was ordered by General Wheeler to withdraw my command, as he had been ordered to return immediately to Murfreesboro.
I returned that (Saturday) night to my original position on the left of our line of battle, near Mrs. Washington's, and remained there until sunrise Sunday morning, when a dispatch from General Wheeler informed me that the army had commenced a retreat. I fell back to Murfreesboro, and retired on the Shelbyville pike in rear of the army.
I take pleasure in calling the attention of the commanding general to the good conduct and military bearing of most of the officers and men of my command, and particularly the gallant conduct of Major J. Q. Chenoweth, of Colonel Butler's regiment, who was on duty as a member of my staff, and Captain G .M. Tilford and Lieutenant D. E. Myers, of Colonel Smith's regiment, who were on duty with Colonel J. Warren Grigsby's regiment during the engagement of Wednesday evening.
My thanks are due to the officers acting on my staff for the efficient aid rendered me during the engagement.
I have the honor to be, your obedient servant,
Abraham BUFORD,
Brigadier-General, Provisional Army”
[i]
ENDNOTES
[i] No. 306 Report of Brigadier General Abraham Buford, C. S. Army, commanding Cavalry Brigade, including skirmishes December 31-January 3.
Posted by Mary Beth at 10:43 AM