The Romance of John and Mattie 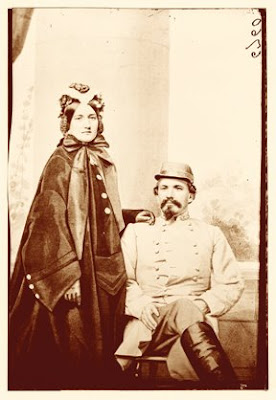 Mattie Ready and John Hunt Morgan. Photo courtesy of the Library of Congress

“When Federal troops occupied Murfreesboro, Tennessee, Miss Martha “Mattie” Ready, a local belle, became famous for her defense of John Hunt Morgan, whom she had never met but much admired. A Yankee asked her name, and she stoutly replied, “It’s Mattie Ready now, but by the grace of God one day I hope to call myself the wife of John Morgan.” Hearing the story, Morgan made it a point to look her up, found her to be “as pretty as she was patriotic,” and married her after a whirlwind courtship.”[i]

Morgan established his headquarters to Murfreesboro in February 1862. There he met Martha “Mattie” Ready, the daughter of Charles Ready. Ready was a prominent lawyer who had served as Tennessee’s United States Congressman prior to the war.

“One day the colonel [Charles Ready] was strolling through the army camp when he met Morgan and invited him to dinner. He sent a slave home with word that ‘ the famous Captain Morgan’ was coming: ‘Tell Mattie that Captain Morgan is a widower and a little sad. I want her to sing for him.’”[ii]

While Mattie was just 21 and Morgan already 37, the pair fell madly in love and became engaged in March. [iii]

Their wedding, held in the Ready family mansion on December 14, 1862, was the event of the season. Morgan had just been promoted to brigadier general.

“The wedding of John Hunt Morgan and Mattie Ready took place in her home on Sunday, December 14, 1862, one day after Morgan’s promotion to brigadier general. Morgan was thirty-seven, his bride twenty-one. Bishop Leonidas Polk, with his vestments covering his general’s uniform, performed the ceremony. Her brother Horace, an officer on William Hardee’s staff, and Colonel George St. Leger Grenfell served as groomsmen. Generals Braxton Bragg, William Hardee, Ben Cheatham, and John Breckinridge looked on. Jefferson Davis had been at the residence to offer his congratulations, but he left before the ceremony. During an elaborate dinner, two regimental bands played outside, and one came in to play for dancing. On Main Street in front of the house, Morgan’s men built bonfires and cheered the couple. A friend congratulated Mattie: “It is certainly the match of the Times—‘The Belle of Tennessee & the dashing leader whose name rings throughout the civilized world.' One of Bragg’s staff officers later noted: 'I never witnessed a marriage with which I was so impressed as that of John H. Morgan….General Polk, Bishop of Louisiana, performed the ceremony and gave the blessing.'”[iv]

"After dinner a group of officers were having wine in the library when someone suggested that Dr. David Yandell, a Confederate surgeon, perform his popular impersonations of senior officers. He did Polk and was finishing Hardee when Bragg was called from the room. Yandell’s star piece was a caricature of crusty Bragg. 'Do Bragg,' they pleaded, and he began, striding to and fro, scowling, waving his arms, and rasping out jerky sentences on two of Bragg’s favorite themes: lack of discipline and use of whiskey in the army. Suddenly, Bragg walked back in—Yandell stopped, his face turning pale. 'Go on, Doctor,' ordered Bragg, 'don’t let me interrupt you. It is certainly entertaining and doubtless quite accurate.'” [v]

Yet not everyone was delighted to see John Hunt Morgan take a second wife.

“Col. George St. Leger Grenfell had participated in the wedding but said later that he had attempted to prevent it, as he felt that marriage would cause John to become cautious and less enterprising. And Mattie’s family had instructed her, 'You must remember your promises, not to restrain the General in his career of glory, but encourage him to go forward.'”[vi]

Mattie’s wedded bliss was to be short lived.

“One week after the wedding, Gen. John Hunt Morgan rode off on the Christmas Raid into Kentucky in search of much-needed horses and supplies. Mattie accompanied him as far as she could — to Alexandria — and together they watched the grand parade of Morgan’s troops, which had never looked better. Everyone admired the handsome couple and their obvious affection for one another. The next day, Dec. 22, 1862, the newlyweds were separated when Morgan and his men rode north into Kentucky and Mattie returned to Murfreesboro.”[vii]

Morgan was off to lead the Christmas Raid, an action that would culminate with the destruction of the L&N's Muldraugh’s Hill trestles.

The profuse letters which endlessly flowed between John and Mattie bear testament to a true romance.

“And then my precious one I shall try and get back to you as fast as possible and then my pretty one nothing shall induce me to again leave you this winter. How anxiously I am looking forward to the moment when I shall again clasp you to a heart that beats for you alone. Do not forget me my own Darling, and you may rest assured that my whole thoughts are of you. Farewell my pretty wife, my command is leaving, I must be off.”

Mattie stoically faced the reality of becoming a military wife.

“Mattie returned home to Murfreesboro just in time for the Battle of Stones River on Dec. 31, 1862-Jan. 2, 1863. The Ready family, like the rest of the townspeople, was spared none of the horrors as a major battle raged around them.”[viii]