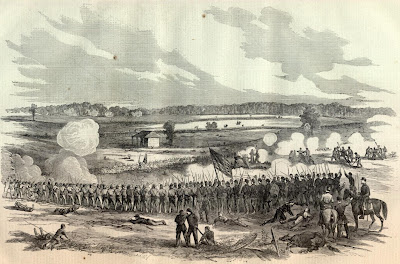 The Battle of Perryville, sketched by Mr. H. Mosler[i]

“The South was holding on to an ideology that was more traditional. The North represented change. Corporations, commerce - not bad things - but different things and change was a threat.”[ii]
September 20 - October 3, 1862
General Braxton Bragg moved to occupy Bardstown, establishing his headquarters at Edgewood, the house our family knows as the home of Dr. Harry Spalding.[iii]
“Bragg was courageous, and at times imaginative, resourceful, and bold. But he was never patient, either with his men or with the enemy, and he lacked that imperturbability and resolution so necessary in field commanders. Handicapped by poor health, he had no real taste for combat. And he was not lucky. Nor did he have the ability to inspire confidence in his subordinates. Notoriously inept at getting along with people he disliked, he simply could not win the loyalty of his chief lieutenants. He lacked what has been called the common touch. By training and by preference a regular army man, contemptuous of volunteers and a democratic military establishment, he was unsuited to lead an army composed overwhelming of individualistic citizen-soldiers. A mediocre tactician, he seemed unaware of the technological changes that had outdated pre-war assault tactics and strengthened the advantages of defensive combat.”[iv]
The war was had become a part of the daily lives of Southerners. Even women, who were expected to refrain from political arguments and public speaking, publicly lent their pens and voices to the support of the war.
"I was never a Secessionist, for I quietly adopted father's views on political subjects without meddling with them. But even father went over with his State, and when so many outrages were committed by the fanatical leaders of the North, though he regretted the Union, said, ‘Fight to the death for our liberty.’ I say so, too. I want to fight until we win the cause so many have died for. I don't believe in Secession, but I do in Liberty. I want the South to conquer, dictate its own terms, and go back to the Union, for I believe that, apart, inevitable ruin awaits both. It is a rope of sand, this Confederacy, founded on the doctrine of Secession, and will not last many years - not five. The North cannot subdue us. We are too determined to be free. They have no right to confiscate our property to pay debts they themselves have incurred. Death as a nation, rather than Union on such terms. We will have our rights secured on so firm a basis that it can never be shaken. If by power of overwhelming numbers they conquer us, it will be a barren victory over a desolate land. "