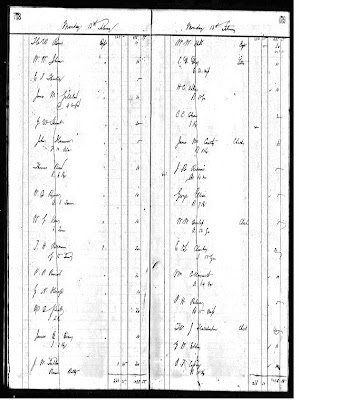 Notes from which the February 13, 1863 Roll at McMinnville, Tennessee was compiled. James Edward Evans appears near the bottom of page 78. Clicking on the image will enlarge it.

February 13, 1863
On Monday, February 13, 1863, roll was taken at McMinnville, Tennessee. The bottom of the roll reads:
“In September, 1862, the company (then known as Company “G,” Forrest’s Regiment) had been captured at Fort Donelson, together with horses, equipment, etc., and was exchanged at Vicksburg, Miss.; proceeded thence to Knoxville, Tenn., and were ordered to report to General John H. Morgan, at Murfreesboro, Tenn.: acted accordingly and were assigned to Gano’s Regiment of Morgan’s Cavalry. Since being connected with that command, the company has accompanied it into Kentucky and returned with loss of four men, as reported on the rolls. NOTE – Previous to the surrender at Fort Donelson this company was serving as Company “G,” Forrest’s 3rd Tennessee Cavalry.”
ROLL OF COMPANY I, SEVENTH REGIMENT CAVALRY, KENTUCKY VOLUNTEERS, CONFEDERATE STATES ARMY, #31 Evans, James, Rank : Private, When Enlisted: Sept. 7, 1862, Where Enlisted: Danville, Ky”[i]
What was this? The Compiled Military Service Record for James Edward Evans always lists him with the 3rd. How the 3rd came to be redesignated at the 7th is explained below.
“THIRD REGIMENT CAVALRY, KENTUCKY VOLUNTEERS, CONFEDERATE STATES ARMY. ROSTER FIELD AND STAFF, THIRD REGIMENT CAVALRY, KENTUCKY VOLUNTEERS, CONFERATE STATES ARMY
1. J. Russell Butler, Colonel
2. Jack Allen, Lieut. Colonel
3. Jacob w. Griffith, Lieut. Colonel
4. J. T. Chenoweth, Major
NOTE ~ For Roster and Rolls of Gano’s 3rd Regiment, see Roster and Rolls of the 7th Kentucky Regiment Cavalry, C.S.A. Gano’s Regiment was part of 1st Brigade (Duke’s) Morgan’s Division and was known as the 3rd Regiment throughout the war – Richard Gano, Colonel; E. L. Hoffman, Lieut. Colonel – but it seems there was some one who was operating in Southwestern Kentucky and Tennessee who had a Commission as Colonel of the 3rd Kentucky Cavalry, C. S. A, ate-dating Colonel Gano’s; so the U S. War Office (Dept. Records of the Rebellion) changed Gano’s Third Regiment to the 7th Regiment Kentucky Cavalry.” [ii]
Studying the Company rolls listed within McDowell’s The Report of the Adjutant General of the State of Kentucky, Civil War, Confederate, Vol. I, one can find clues as to the many reorganizations that took place as the Army of Tennessee was formed. On the Roll of Company F, 7th Regiment Kentucky Volunteers, C. S. A., twenty eight names are noted as “Member Company ‘E’ 3rd KY Cavalry; attached.”[iii] Six former members of Company I, 1st Regiment Cavalry (Edward Brown, W. Dickerson, James Evans, John Gray, R. H. Harmon, and S. O’Bannon) became members of Company I, 7th Regiment Cavalry.[iv] Thus, while designations continuously changed, James appears to have spent his entire time in the Cavalry with at least five constant comrades.
There remains a final consideration which may explain why James referred to himself as a member of the 3rd KY. Southerners who became prisoners of war, especially if they had become associated with Partisan Ranger Groups, often gave their initial enlistment rank, the name of their Company, and the name of the Regiment in which they had first enrolled in the hope they would face quicker exchange and better treatment while “guests of the North.” In 1862, U. S. Secretary of War Edwin M. Stanton had excluded prisoners classified as guerrillas from exchange under the conditions of the Dix-Hill Cartel. Thus, those associated with John Hunt Morgan’s raids had good reason to present “other information.”
“Exchange was the only hope for prisoners everywhere…” [v]
February 14, 1862
“February 14, 1862, Fort Donelson, Tennessee
Have been much exercised in mind for several days about the increase of card playing cannot expect to stop the men while officers openly play daily I pray for wisdom & grace Oh my Father teach what I ought to do & give me the strength to do it."
~ Chaplin Israel Cogshall, 19th Michigan Volunteer Infantry [vi]
February 20, 1863
“Louisville, KY., February 20, 1863
Col. A. Stager:
Rebels in Considerable force at Somerset, Ky., supposed to be under Morgan, advancing into interior of Kentucky. General Rosecrans is preparing to change base to Tennessee."
Sam Bruch [vii]
February 21, 1863
“Saturday, February 21
.
Started again. Went about two miles, then started out foraging. Took five loads of corn and four of hay. Went on. Overtook regt. Camped near Crab Orchard. Took three of Morgan's pickets. Morgan reported at Somerset or Mt. Vernon.”

“Louisville, Ky., Feb. 23, 1863
I have no news to tell you except that we discovered last week a soldier who turned out to be a girl. She had already been in service for 21 months and was twice wounded. Maybe she would have remained undiscovered for a long time, if she hadn't fainted. She was given a warm bath which gave the secret away."
~ Joseph Frederick Shelly, 41st Indiana Volunteer Infantry, 2nd Calvary, Co. B [ix]
February 26, 1863
“Thursday, February 26
Started again. Four wagons burned, not being able to take them. Considerable camp equipage thrown away also. Reach Ky. River, build a raft. Cannot use it, the current of river being too strong. Let it go down stream and go to next ferry. Take part of things to opposite shore. Morgan reported within four rules of here. Get supper at private house near here, our rations having given out.”