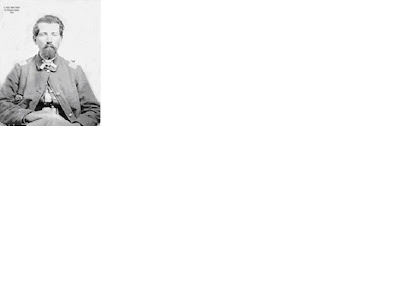 Captain Henry Albert Potter of the 4th Michigan Cavalry
Camp Stanley
Near Murfreesboro
January 8th 1863
Dear Father, Mother, and Amelia
I am not dead, wounded, or sick, but, on the contrary, never felt better in my life. Have since I left Nashville. I can say that I have had an active part in as hard a battle as has been fought during the war.
A general move of the army was made on the 26th Ult. The fighting commenced about 10 miles from Nashville the same day and lasted nine days. When the rebels were driven from Murfreesboro. The 4th Michigan has won at least a name and place. On Saturday 27th four companies under Captain Mix were sent out and came upon a strong body of rebel cavalry. There was about 150 of us we charged upon 200 of them, drove them about 2 miles shot 5 of their men, a no. of horses and took 8 prisoners. One of our corporals was wounded in the side.
January 9th
We have been busy today arranging our tent. We have got a sesesh [Northern slang for secessionist] stove, Table and Bunk, taken from one of their camps.
Our Company was engaged in Wednesday’s fight. We made two charges upon rebel cavalry. Capt Mix [Frank W Mix] had a splendid horse shot from under him, our quartermaster Sgt was wounded. I have had 3 or 4 narrow escapes, have been where the cannon ball and shells were flying close around me and I must be lucky. I did not think of getting killed at all but I expected to be wounded. We entered Murfreesboro on Monday. The rebs left Saturday night. Our right was driven back on Wednesday with great slaughter on both sides. I passed over the field Monday. The rebels had carried nearly all of their dead, ours were lying in rows as they had been carried to bury. Horses dead and guns and artillery filled the ground. I can’t tell you anything of the sight.
The rebels captured and burnt a part of our train and among the rest our company wagon were stolen [my belongings] excepting what I had on. The likenesses and the books are gone. The captains and lieutenants clothes were all gone. Such are the fortunes of war. John Gilbert was not with us thru the fighting was not very tough and had a pactious[word as written] horse he stayed with the train. Charley Smith [Charles H Smith] is without doubt dead, he died with the black jaundice as we were informed. Herman Lounsbury [Herman H Lounsbury] is very sick. I am afraid he will have a hard time of it if he ever gets well. Charley Starkweather [Charles A Starkweather] is isolated with a lame back. Alf Shepard and Norman Smith are well. We shall be very busy for a week now making out our payrolls – have a good deal of writing. L J Southworth [Lorenzo T Southworth] is writing home he is well. I am liking soldiering as well as ever, if only I keep well and I never felt better--
Albert
[written in the margins:] Give my love to all, and write soon, the news I have not heard from you since I left Nashville.
I sent a sesesh envelope and some cotton seed, plant them they will grow.
I would have written before but have had no chance to send Direct to Murfreesboro, Tennessee.
[i]
ENDNOTES
[i] The Letters of Henry Albert Potter, Captain: 4th Michigan Cavalry, Edited by Michael Palmer Ruddy.
Posted by Mary Beth at 10:33 AM