“Come tighten your girth and slacken your rein
Come buckle your blanket and holster again
Try the click of your trigger and balance your blade
For he must ride sure who goes riding a raid!” [i]

The 3rd skirmished in Tennessee and Kentucky and then joined with John Hunt Morgan to conduct a raid into Indiana and Ohio as part of the Second Brigade under the leadership of Colonel Adam Rankin Johnson and Lt. Col. J. M. Huffman. 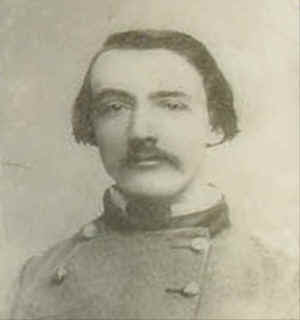 Colonel Adam Rankin “Stovepipe” Johnson earned his nickname when he captured Newburgh, Indiana on July 18, 1862. With only twelve men and two joints of stovepipe mounted on the running gear of an abandoned wagon he took the town from a sizable Union garrison by treating to blow them up with his phony cannon.[ii]

Due to a Confederate naming SNAFU, Company I, 3rd Regiment Cavalry, Kentucky Volunteers, CSA, which had originally been part of the 1st, was redesignated as the 7th by the Federal government after the conclusion of the war.

“7th Cavalry Regiment was organized in September, 1862, using Gano's Texas Cavalry Battalion as its nucleus. The unit skirmished in Tennessee and Kentucky, then fought with J.H. Morgan, Most of its men were captured at Buffington Island on July 19, and the rest at New Lisbon on July 26, 1863. The regiment was not reorganized. Colonel Richard M. Gano, Lieutenant Colonel J. M. Huffman, and Major Theophilous Steele were in command.”[iii]

The following are the names of the men in the Company with whom my 2nd great grandfather, James Edward Evans, rode on the Great Raid.