War Upon The Doorstep 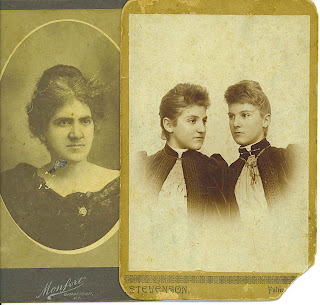 Augusta Evans is on the left.
The two girls are her daughters Augusta and Zoe Belle.

With both Northern and Southern armies moving through the area, the citizens of Nelson County, Kentucky found their idyllic rural existence greatly disrupted.

“Nelson County was in the center of much controversy. First, the location of the turnpikes and the railroads dictated the movement of many troops and supplies through the area. Turnpikes were stone-based roads capable of handling wagons and heavy travel in all types of weather. Many families were split in their loyalties, fathers, sons, or brothers, husbands and wives. Soldiers from Nelson County fought for both sides during the conflict, but a larger number served the Confederacy than served the Union. The occupation of Bardstown by Union troops began in September 1861 and ended in September 1865. As one local woman later remarked, ‘I couldn’t step out my kitchen door without stepping on a Yankee soldier.’”[i]

The city of Bardstown was placed under martial law during most of period of the Civil War. Many families found themselves endlessly harassed by union soldiers; others saw their normal activities curtailed. [ii]

While the Evans family had adhered to Governor Magoffin’s policy of neutrality, it appears they were not spared. The following account is related by the descendants of Augusta Evans. Augusta was the younger sister of John B. and James Edward Evans.

“… one afternoon when we were talking she [Zoe Belle Liston] told me her mother remembered the Yankee soldiers riding through their house on their horses - there was a big wide hall through the middle of the house with large front and back doors.”
~ Bobbe Pound, great granddaughter of Augusta Evans [iii]

If the above memory is correct, it would certainly explain why Augusta’s brothers, my 2nd great uncle and 2nd great-grandfather, abandoned their neutrality in favor of enlisting with the Confederacy. The tides of war had flown over the doorstep and right through their center hall!